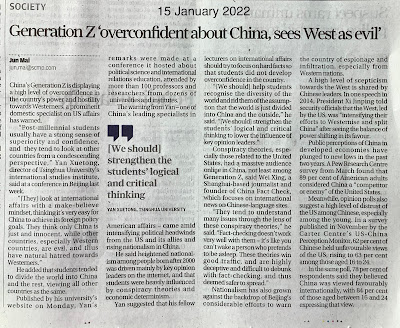 I’ve said something along these lines for years — that Chinese youth are hyper-nationalist and so, xenophobic. But it’s one thing for me to say it, sitting here, foreigner in Hong Kong. It’s another, and remarkable, for a senior academic at Tsing Hua University China, to say it.

Both trends — Chinese yoof despising the West and the West hating on China — are pretty dangerous. Not just for the future, but, like, now. Xi Jinping’s government has fanned the anti-west feelings and is now incentivised to play to it, a nasty vicious circle. While what Trump started four years ago, seems to be working for Biden, Blinken & co.