“ If Hong Kong continues with its zero-Covid policy, it will become a shell of its former self” | Peter Kammerer 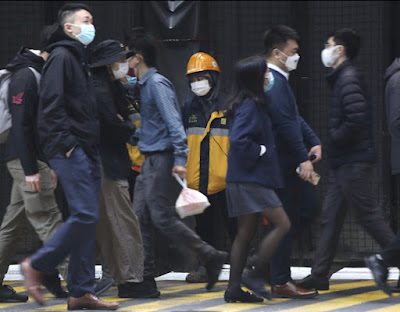 In case it’s not clear to Occasional Readers, I’m anti our Zero-Covid policy here in Hong Kong. My old journo mate, Peter Kammerer sums up the case for that view pretty well here.

His final para sums it:

Hong Kong can continue on its present track battling a wave of disease that gets ever-higher. In the process, the city will become a shell of what it once was, with frustrated, disillusioned and mentally strained residents. Or, it can look forward to a future of being part of the wider world, able to interact, get talent, learn and prosper.

With thanks to SCMP, I post the whole article below:

Covid-19 has been with us for two years, but I have only met two people who have been infected. One is my son who lives in Paris, who has just come down with the virus for a second time. The first time was the Alpha variant and now it’s Omicron.

It’s hardly surprising given that there are an average of 320,000 cases in France each day, meaning that every person in the country of 67.3 million will potentially have had one type or another in 210 days.

France, like many other countries, has decided to live with the coronavirus. Omicron, far more transmissible than previous variants, is spreading like wildfire around the world. My son got it even though he has been previously infected with the disease and is double vaccinated with the Pfizer-BioNTech vaccine. His only symptom is a slight dry cough.

France has adopted some mainland-China-like practices with its prevention strategy, requiring all citizens to use a smartphone app showing vaccination and testing status to enter venues like government buildings, restaurants, bars, fitness centres and schools.

Mask-wearing and hand cleansing are commonplace in urban areas, but the virus is still so rampant despite a countrywide vaccination rate of 78 per cent that it is inevitable people will get reinfected.

Compare that to Hong Kong. The zero-tolerance approach adopted by Beijing is largely followed in the city of 7.4 million people. There are differences when it comes to enforcement; the “Leave Home Safe” tracing app is nowhere near as invasive as the mainland’s version and primitive by French standards.

Its ability to track and inform about infections is so limited that when clusters occur, health officials have to resort to credit and travel cards and CCTV footage to determine close contacts. Only from February 24 will proof of vaccination be necessary to eat at a restaurant, work out at a gym and enter a host of other places.

But not tolerating the disease has obvious drawbacks; if there is a serious outbreak of Omicron, as is happening elsewhere, Hong Kong is woefully short of testing and quarantining facilities and hospital isolation and intensive care beds.

The shortcomings aside, the city has done a remarkably good job of keeping the coronavirus out. Mandatory lengthy quarantining for arrivals and close contacts of infected people, social distancing and testing rules mean that in the midst of the city’s fifth wave, daily cases have averaged only in the dozens. At that rate, it would take several hundred years for every citizen to get infected.

But the implications of such a policy are obvious – while my son can get on a plane and go to other countries for a holiday without quarantining for weeks at a time on arrival and return, as he has done several times in the past year, my reluctance to spend most of my holiday trapped in a hotel room means I have not travelled overseas for two years.

Hong Kong’s perceived backwardness by Beijing when it comes to preventive measures means I am even unable to go to the mainland or neighbouring Macau.

The government’s desire to please mainland authorities in the hope of cross-border travel resuming is also negatively affecting relations with the foreign business community, with activities of staff being severely curtailed. Some companies are threatening to relocate offices to Singapore and other places that have decided to live with Covid-19.

The city’s international reputation is also suffering from decisions perceived as extreme, such as the recent order to cull pet hamsters believed to be a source of transmission. The longer the strategy continues, the more business, talent and standing will be lost.

Hong Kong can continue on its present track battling a wave of disease that gets ever-higher. In the process, the city will become a shell of what it once was, with frustrated, disillusioned and mentally strained residents. Or, it can look forward to a future of being part of the wider world, able to interact, get talent, learn and prosper.