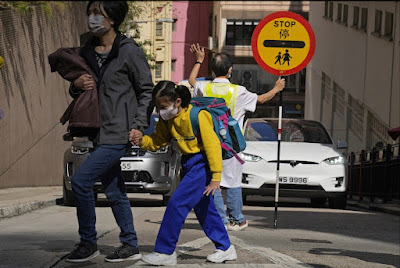 Man, oh man. It’s what I’ve said in this blog for over a year now. That school closures are a bad idea, and that both “the science” and experience prove it.

Collin Levy quotes some truly startling studies — from the World Bank, UNESCO and UNICEF no less —  that school closures will cost $US 17 TRILLION in lifetime earnings. Poorer countries like Bangladesh, Philippines and Panama are going to suffer worse and fall even further behind. Lockdowns are exacerbating inequality. (ADDED: School closures a disaster)

Hong Kong should not be closing schools again. We only are because we are slaves to Beijing’s draconian Zero-Covid strategy.

The Covid-19 story of the year is playing out in Hong Kong, and children again have a starring role. On Tuesday, Chief Executive Carrie Lam Cheng Yuet-ngor announced that all kindergartens and primary schools will be closed for on-campus learning until after the Lunar New Year. With experience as a guide, it will be much longer than that.

The decision was made in pursuit of the city’s goal of zero-Covid, in an effort to please Beijing, where the party leadership is using any means necessary to keep coronavirus cases low in the run-up to the Olympics and the 20th National Congress later this year.

But while China’s approach was wise before vaccines were available to save the lives of the vulnerable and elderly, that is no longer the case. The Omicron variant that’s spreading rapidly around the world appears to be less severe than previous variants, particularly for those who have taken an effective vaccine. [More…]