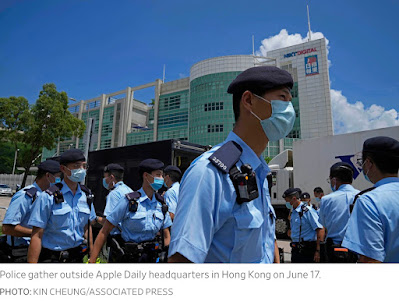 ADDED: I critique it below the fold
A link to the Editorial in the Wall Street Journal that got our Chief Secretary, John Lee’s boxers in a twist. I’ll come back to make some comments on it, just bookmarking it for now.

On Wednesday authorities arrested seven people linked to Stand News for “conspiracy to publish seditious publication,” according to the Hong Kong police. They include top editor Patrick Lam, as well as pop singing star Denise Ho and former lawmaker Margaret Ng, both former board members.

Police also arrested former top editor Chung Pui-kuen, whose wife—former Apple Daily associate publisher Chan Pui-man—has been in jail since July. In these days of Beijing control in Hong Kong, families that dissent together end up separated behind bars. [More…]

Any comments I make that don’t fully support the WSJ editorial are going to seem apologist. So let’s be clear: moves to restrict the press are Not Good. Anywhere. And we deplore. Clear.

Apple Daily and Stand News have been closed down. Apple most have heard of, though I doubt many in the west would know that it was a trashy sensationalist tabloid, often outright hysterical. We gave up advertising in it as we got few leads to our business, its demographic not being ours — young people looking for further education, which says, well… something, anyway.

Few in the west will have heard of Stand News, until it was closed, but during 2019 one in three Hingkongers was reading it.

I wish they hadn’t been closed, of course. That’s me, a comfortable westerner living comfortably in Hong Kong. But when you’re dealing with an authoritarian government don’t be surprised when they do authoritarian stuff. China is the sovereign and China is run by the Communist Party. Not the Lib-Dems or the Democrats or even a Republican Party. It’s a Marxist-Leninist Communist Party (it’s in its Constitution). We, here at ForsytheLee, weren’t surprised when they acted to quell separatist forces — and let’s be clear there were separatist forces openly at work during 2019. We were surprised that there were so many people fervently believing that Hong Kong could be independent. But it’s true. There were many.

If anything we were surprised Beijing acted so late and so mildly. There were many at the time talking of  a major crackdown with tanks and troops on the streets. Some were even hoping for this, part of a strategy of goading police and the government to overreact so they could show the world how evil they were, and thus justify foreign direct intervention. Such were some of the dreams. But the only  time the troops did leave their barracks in 2019 was to help clean up a street in Sheung Wan. A street that had been trashed the day before by rioters (or “peaceful protesters” if you must). The pictures were troops with brooms and buckets, not bullets and bodies.

The action when it came was imposition of a National Security Law. Unwelcome, perhaps, but allowable under Hong Kong’s Basic Law. All defence and national security issues are with the sovereign, Beijing. The only people surprised and “shocked” were the naive youngsters hailed as vanguards of “freedom and democracy”, and all their acolytes and foreign bien pensants.

A note on Apple Daily. I read it from time to time, mainly because we occasionally advertised our business in it. I’d also wanted to write Letters but they had no letters page. That’s the way with most of the Chinese language media. Before the ructions of 2019, they were a sensationalist tabloid, gruesome, in-your-face car crash photos in glorious colour on the front page. Imagine a News of the World (now also defunct!) but more gory and in Chinese; that’s Apple Daily. Come 2019 they became more overtly political, all anti-government (so-called “yellow” press vs the pro-gov “blue” press). What sealed its fate was owner Jimmy Lai’s not just outspoken anti-communism, but his calling for Hong Kong independence. I don’t know how often I have to say it, but “independence” is the biggest of no-nos for Beijing. We recall Lai in Taiwan calling for US to “liberate” Hong Kong. His staff marched in the streets with US flags, singing The Star Spangled Banner, for goodness sake. That’s pretty shocking stuff to anyone, let alone authoritarian communist apparatchiks.

Stand News closure is more troubling, as they were rather more measured in their support for the 2019 demos and rioting. They too were “yellow” but principled yellow. Yellow mellow. What sealed their fate was success.

WSJ again: “… the government tore down a statue commemorating victims of the Tiananmen Square massacre”. Actually, it wasn’t.

WSJ: “Nobody is safe in Hong Kong”. This also wrong. It’s likely to be if you are high profile and choose to criticise “the X-factor”, our dear Premier Xi Jinping. But that aside you’re fine. And in the general sense of safety, Homicide and violent crime, Hong Kong is exceptionally safe. In most cases the safest in the world.  Whereas in the US homicides and violent crimes are in the rise, including the home of the WSJ, New York.

And we also have an excellent world class and available to all medical system  as an older person who’s had hear issues and operations here I attest to that from my own “lived experience”.

Not, to repeat, that there’s a lot to criticise. Of course there is. But to claim “No one is safe in Hong Kong” as the click-bait headline for an article full of hyperbole and plain wrong, is simply, itself, wrong.

ADDED: It’s Hill & Knowlton, so, sure, an agenda, as everyone has an agenda. But you can bet that many more companies will be reading assessments like these, than those of WSJ:

Following last year’s imposition of a national security law for Hong Kong, the overhaul of the electoral system marks another step by Beijing towards strengthening its management of the city. This can be expected to continue over the next five years, with critics voicing concerns that the continued deterioration of Hong Kong’s political autonomy could significantly undermine its appeal as a leading global finance and commercial hub.

Yet while the potential erosion of the “one country, two systems” model may deter some companies, Hong Kong remains a highly attractive destination for international businesses and a major conduit for facilitating China’s continued integration with the global economy. This is unlikely to change dramatically, at least in the short to medium term. What’s more, the 14th FYP made clear that Chinese authorities have prioritized maintaining the city’s commercial stature, reiterating longstanding priorities such as continuing to provide support for Hong Kong’s further development as an offshore RMB business hub, international financial, shipping, and trading center, and more.

I came across the above snippet when I was looking for evidence the claim that China plans $US 15 Trillion on renewables to 2050. Over $US 550 billion per year. Or more than the global expenditure on renewables in 2020. I haven’t found that yet. Could be. China is already the world’s largest investor in both Wind and Solar.