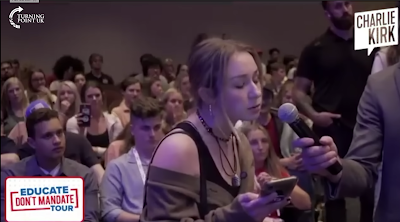 Here's the best argument against the dopey case put forward by that young lady (Blacks are 38% of the prison population, but only 13% of the country population). Here it is:

Men and women are about 50/50 of the population. But the jail population is 92% male. Why is that?

Is it because of misandry?

The actual reason is: because men commit more crimes than women. That's why there are more of them in jail than women.

Ditto for the Black/White disparity in incarceration rates. Blacks, in America, commit more crimes, per capita, than whites. (and, btw, than Asians).

That clearly indoctrinated young lady raises as evidence the difference in sentencing between selling crack cocaine (which is mostly a Black thing) and selling powder cocaine (which is more of a white thing). But that disparity was due to a crime bill put forward by Senator Joe Biden back in 1984. For which he later apologised. And was never meant to mean more Blacks jailed. Just happened that Blacks dealt more in crack coke than powder coke. Joe was -- then as now -- clueless. But still, not institutional.  And it's been fixed.

The young lady storms off. Saying "you haven't answered my questions". But what's really happened is that Charlie and co have not confirmed her priors.