"Why are Asian-Americans being left out of diversity and equality initiatives?' 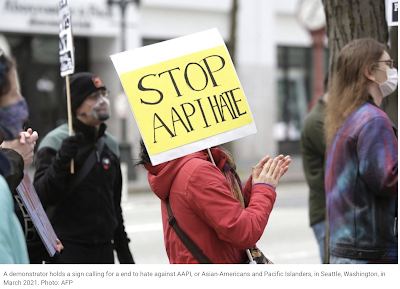 A paean to wokeness. Amy Wu, “a journalist based in New York and California”. Almost ’nuff said, right there. Another "oppressed" Asian woman living in comfort in the US. Writing an article that had the original headline: Still no seat at the table for nations “model minority”. Which looks like a headline they changed (to the one above) because it’s such arrant nonsense, as Amy Wu’s own experience shows. Anyhoo, here’s what I said at the site, and below I want to add to that a bit.

(1) "…shooting spree that killed six Asian women in Atlanta, Georgia.". This was shown to be an "anti-massage-girls" killing spree not a racial hate crime. It doesn't help Wu's case she gets basic facts wrong in the first para.

(3) Museum of Chinese in America "Responses": why highlight the discrimination, rather than the (obvious) successes, including that of Mx Wu...?

(4) "… diversity, equity and inclusivity are more than just a job title". Yes! They are racist. They promote "race essentialism”. They have worsened race relations in America (data show) since this whole Woke movement overwhelmed us (A movement that Mx Wu, sadly but obviously, is in thrall to -- she clearly needs to be told how and what to think).

Weird isn't it? America is soooo raaacist that Asians perform at the TOP of the income ladder.…ADDED: "America … leading the world in really successful oppressed people” (@~5 mins)

Amy Wu’s two main points: (1) Asian Americans are are being “left out” of DIE initiatives, have “no seat at the table”. And (2) They’re subject to massive increases in Hate Crimes.

Re: The “no seat at the table” argument. No. They are getting more and more into areas they have an interest in: movies, politics, whatever. As even The Guardian shows. Mx Wu is behind the times. And/or the SCMP is.

Re the “massive increase in anti-Asian hate crimes”, here’s the facts: 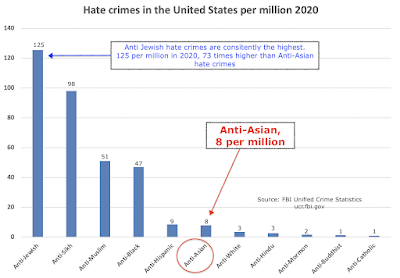 That chart is from my own spreadsheet, using figures from FBI Crime Stats, generally recognised as the most authoritative source of US crime figures.

Note that in her article Mx Wu only quotes percentage increases. Which sound scary. Like “300% increase in anti-asian crimes”. That hides when the increase is, say, from 2 cases to 8 cases, a 300% increase. But still to a small number of cases. That’s what’s happened above. There was an increase in anti-Asian hate crimes, but from a low base to a slightly less low base. Anti-Asian hate crimes are still very low, in the US. They are 73 times lower than anti-Jewish hate crimes.

And do you hear Jews moaning?

The anti-Jewish hate crimes has been at the top of the list for ages, pretty much forever. You know what you don’t hear? Jews moaning about it. Maybe they make some jokes about it in their stand-up comedy. But moaning, like we now have the Mx Wu’s and the Mx Youngs of the world. They just don’t. So I’m inclined to say to the Asian-American community: give it up. Being a victim is not a good way forward. You are not “Oppressed” because someone suggested you adopt an English name. You are not “Oppressed” because for decades you, as a group, were not interested in politics, and so are underrepresented. Yet when you did show interest, you’ve quickly made a mark. Give up on the moaning victimhood thing.

Statement of personal interest: I’m married to an Asian person, one born and raised in Beijing. She is also not a fan of this racial essentialism, doesn’t want to be known as “Asian-anything”, or as a “woman of colour” (as she was for a while, until Asians again became “White” or “white-adjacent”).