Chronicling the pandemic in Hong Kong 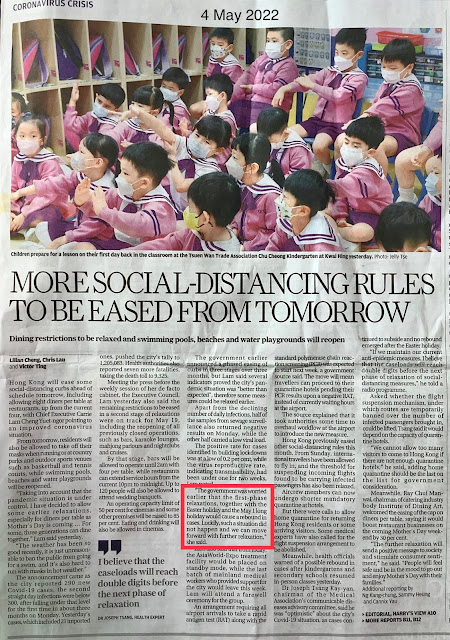 More proof, in the red box, that all the masking and social distancing (aka NPIs) of the last three months were ineffective. Or at the very least not nearly as effective as the government’s  “we’re at WAR with the virus” narrative would have you believe. Some might say that the government’s position is unfalsifiable, because we can’t know what would have happened if we’d not had NPIs. Well, no. Because we have the experience around the world. All of which went through omicron waves, earlier than us, all remarkably similar in shape and duration, no matter strict NPIs or zero NPIs. I’ve shown that with WHO data.
Then there’s the supporting evidence from our very own omicron wave. Consider what our “Chief Executive” Carrie Lam says in the red box above.

Lam says: “The government was worried first stage relaxation … would cause a rebound in cases”. Nota Bene: you’re “worried” about a rebound only if you believed the NPIs were effective in the first place. And that therefore relaxing them would must lead to a rebound. We weren’t worried in this blog, because, as we argued, the wave was doing what it did. Whether or not we had strict NPIs. Because that was the case world-wide. Carrie was “worried”; now she’s not. But neither she nor her experts draw the obvious conclusion from that. Which ought to be a an independent enquiry into the pros and cons of our specific strict NPIs. (We’ve also been pushing vaccines, and now, somewhat belatedly, have high rates. Except, still, amongst the elderly, who are most in need and who ought to have been a focus from early on. Instead of spending millions sending us little “pandemic kits” with Traditional Chinese medicine. Really). While our “experts” can’t even agree if what we have is a pandemic or an epidemic

As I’ve noted before, The first indication of lack of effectiveness of Hong Kong NPIs was the upward trajectory of our omicron wave, back in Feb-March. We had NPIs from 6 January. Cases did not peak until 6 March, fully two months later. If the NPIs were effective, the cases would have started to ease at latest around 16 January, six or seven weeks before they actually did. A counter argument might be: “had we not had the masking, social distancing, etc, the cases would have been even higher”. Well, no. We already recorded the highest cases and deaths per million than anywhere else in the world. The highest. How many more do we think we might have had if we’d had strict NPIs? My guess is somewhere between “zero” and “bugger all”. After all, there wasn’t much room to get worse at the top of the curve.