A tragedy in the making? 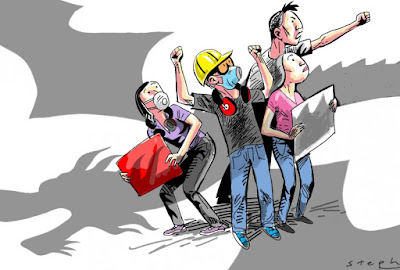 I fear professor David Zweig is correct in ‘Beijing is getting tough on Democracy movement, but at what cost to Hong Kong?’ And if so, we’ve got here, with Beijing tightening its hand, not despite the protest movement but because of it. That is to say, by a combination of naivety and brute obdurate stupidity — on all sides.
Zweig rightly excoriates Carrie Lam for her many missteps. Which were many and serious. But he should have included the “democracy movement” in his criticisms.
Why so?
Certainly at the outset many — including us — took part in huge street protests against the extradition bill, just as we’d taken part in the anti Article 23 protests in 2003, and the Occupy Central movement in 2014.
Last year it was to voice widespread worries over Beijing interference. Worries that the extradition bill might give China the right to demand people who had done nothing wrong in Hong Kong but who made Beijing uncomfortable.  That was surely a Carrie Lam misjudgement.
But since then the protest movement has become increasingly radicalised and violent. While in LegCo, the Pan-Dems have become increasingly radicalised and obstructive. Yet they have only themselves to blame that we don’t today have more democracy today because it was they who rejected the 2013 offers of increased democratic choices — they who demanded 100% and rejected 60%. Instead of picking up the chips on the table and looking to stay in for next hand. Upending the table and storming off in a huff is not a winning strategy.  Especially when dealing with Beijing who are skilled players. And mighty tough.
The Pan-Dems also have themselves to blame for the housing squeeze as they blocked every move to expand land for housing. That’s a whole ‘nother issue, though no doubt a contributor to general disenchantment.
The pan-Dems have managed one thing well: to deflect blame. They manage to convince their followers that it’s all the government and police’s fault. Even though the government is more incompetent than oppressive and the police are pretty much doing their duty; more robust than brutal.
The irony and the tragedy is that no one really wants this. We all want Hong Kong to remain a rich and robust civil society, with all our freedoms (our Seven Freedoms) and the rule of law. What separates me from the more extreme elements of protest movement and the pan-Dems, is they believe pushing one thing above all others — namely “democracy” — is worth sacrificing all the other freedoms for.
For they believe in Lam Chao (攬炒) “stew together” or  “Burn with us”.
To which we, the many ordinary Hongkongers, say “no”. We don’t agree with your suicidal millenarian fantasies.
Can anything be retrieved? Can the baleful hand of Beijing be stopped? Is it too late?  I can only hope not. That some wiser heads will prevail and have quiet talks, yes, behind closed doors, with Beiji g in how to agree on continuation of the One Country Two Systems concept behind 2047. That is the only way.
And if not? Those that suffer most will not be us. Hong Kong has been good to us. We set up a profitable company, sold it and made enough for a comfortable retirement. If things go bad, we can always move, and do so easily. That owing be so for millions with limited assets and no other passport. Who, as it happens, make up most of the protest movement that is leading Hong Kong to the grim fate Zweig outlines.  That is the tragedy.
- May 02, 2020