How is the coronavirus transmitted?

Three main ways.  Which one is the principal way?
1.  Flügge droplets. Aka Respiratory droplets, large enough to drop to the ground. In sneezes, coughs, shouting... etc..
2.  Aerosol droplets: that float in the air and spread by, eg, air conditioning
3.  By touch on surfaces.

It’s critical to know this, because it determines which are the best tactics for reopening economies.
And to do this, you have to study Superspreader Events (SSE), as Jonathan Kay does here.
It’s a bit nerdy, but worth the read, I reckon. /Snip:


Gaining such an understanding is absolutely critical to the task of tailoring emerging public-health measures and workplace policies, because the process of policy optimization depends entirely on which mechanism (if any) is dominant:
Another thing that jumped out:

Given that the main function of the WHO is to control spread of infectious diseases, why on earth are they not doing this work? Why are they not doing what Jonathan Kay is doing?  Adds to my increasingly jaundiced view of the WHO, which began when I saw their tweets in mid January denying human-to-human transmission and was deepened by their statement end January that controlling travel was not the way to go (given that that’s now main way the virus is being controlled around the world).
From the comments an interesting study of the relationship between viruses and Relative Humidity. which for viruses is 40-80%. See here and the chart below: 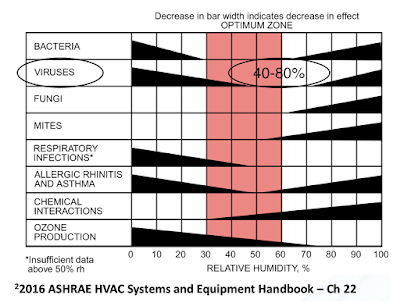