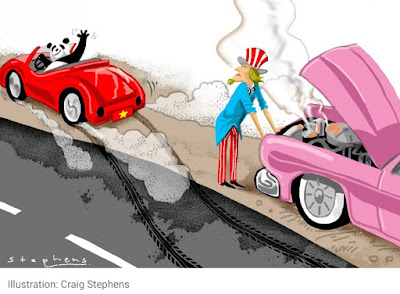 It’s a good hope Tom Plate has: that China might overcome or outgrow its victimhood mentality. I’m not holding my breath. I’ve seen it close up for over forty years and it’s a strong as ever. Of course there’s plenty of reason for the anger. The Opium Wars impoverished an ancient and proud civilisation and deliberately hooked generations of its youth on that “black gold”. It was brutalised by Japan. Chopped and divided by the “allies”. China was on the winning side of two world wars, made huge sacrifices in men and material, but was punished in return.
Thus, here in Hong Kong,  a poorly worded exam question about Japan’s influence on China 1900-1945 has Beijing and HK in fits of high dudgeon with the standard litany of “hurting the feelings of the Chinese people”. We get it.
But Plate’s point is, time to get over it. Many others have made the same point in the decades since the opening up in the seventies. Maybe a drip, drip, drip strategy* might work to wear down this rock I’d resentment. The best case to make, the one that might hit home in Beijing, is the one Tom Plate runs here: that a secure superpower doesn’t act like this. Doesn’t need to be constantly aggrieved. Don’t be snowflakes! Maybe. I’m not quite sure it’s a fair ask. But it would sure help if Beijing could. Magnanimity. That’s the call of the siren.


*ADDED (20 May): drip, drip, drip… James Wertsch says:
Part of the honest feedback that Americans can provide is that we know all too well what it is to be criticised as a superpower. A mature China should get used to this as part of its new status.

Plate’s article is here and below the fold as well.

The decline of the coherence and acumen of American foreign policy would appear to present Beijing with the potential for a century of achievement rather than humiliation. To be sure, historically, the US has demonstrated Olympian ability to bounce back from near-death experiences, from bad economies to bad wars. But, in Asia, there are now growing doubts about that.
Perhaps foremost among those who are starting to conclude that America is past its prime time is China. For its part, however, the Asian giant keeps hitting speed bumps and taking wrong turns of its own. Its policies and pronouncements sometimes seem frozen in a bygone era and fill neighbours – and even admirers of its progress – with dread or doubt.
So, if the 21st century does turn out to be an Asian one – the way the prior one was American and the 19th century was so very British – who will turn out in history’s eyes to be the leader of the Asian pack? The obvious candidate is China. But is it cut out for the role of leader of the Asian century?
China might be said to have history on its side. Having survived that hideous “century of humiliation” when China was banged about like a tennis ball by “barbarians”, and then drawn through the mud of decades of maddening Maoism, China might fairly deserve a whole century named after it.
China certainly had my sympathy when I began reporting on Asia as a journalist 25 years ago. One could not miss the Western ignorance and rancid racism. Over the years, you could find very few major political figures in the American political landscape who seemed to grasp what China was all about.
One rare exception was America’s 41st president, George H.W. Bush, whose background as US representative in China’s capital for almost two years in the 1970s helped him cook up a useful bilateral relationship with Beijing. This proved of value to his country, not to mention to the president who’d be next up: the young William Jefferson Clinton, from Arkansas.
Like most Americans, he knew very little about China, but learned on the job at warp speed, lucking out in having such Chinese leaders as Jiang Zemin, Zhu Rongji and Qian Qichen, who were key players in a talented team pushing the octopus of China – sometimes squirming and screaming – into our internationalist century, while keeping the lead weight of Marxist economic formula from sinking the whole Sino-recovery project.
Now that the world has a potent pandemic on its hands, the tension between China and the US is idiotic. President Donald Trump says huffily that he is not even talking to President Xi Jinping these days.
A note of caution here: in many of China’s issues with its neighbours and others, you are told that the Chinese position is invariably wrong or evil. Please have no tolerance for such oversimplification: many quarrels (such as the South China Sea) are complex, with issues going back far longer than the US has existed. Besides, few leaders in the world are angels.
Against this backdrop, Beijing must undergo a thorough foreign policy review, elevate its manner of relating to others, and start deprioritising old grudges. Adjustments need to be made – often, China seems unduly and neurotically self-centred. If it wants to leave the century of humiliation behind, it could stop living in the past.
No one is in any position to humiliate China any more; surely it gets this by now? From its position of strength, China should aim higher on the scale of best international practices, especially as Washington’s play is sub-par.
Beijing’s propaganda apparatus should focus on the positives of international relations; its foreign policy needs to spurn the antiquated look of an imperial power. Slow down the arms build-up: pointedly building a fleet of seaworthy hospital ships instead of aircraft carriers would offer splendid regional leadership, for example.
So would a reconsideration of long-standing policies for Hong Kong and Taiwan, the two clever Davids flummoxing the Goliath. Together, their populations comprise about 2 per cent or so of the mainland’s. Making too much of a big deal – squeezing Hong Kong and Taiwan too hard – is the sign of an insecure superpower.

Why would the Communist Party risk so much for two relatively small annoyances? There’s a fine line between principle and stubbornness, and just as I sometimes am not sure where that line is in my own affairs, sometimes neither does Beijing. My guess is that more often than not, stubbornness rules.
So, yes, two decades into the 21st century, it would appear, by virtue of current decisions and priorities, that China may not be cut out for the role of transformative leader. Those who obsess about their past risk repeating it.
Only great nations, with great leaders, manage to rise above. So, there is a silver lining in the global-pandemic pause: a bit of time to reflect. We should all use this time wisely, especially Xi.
China has big decisions to make: what to do next while the unsteady American president lusts for re-election – purging enemies, sowing confusion about the pandemic, and baiting Beijing. Maybe this is China’s chance to show depth?
Loyola Marymount University Professor Tom Plate, LMU’s Distinguished Scholar of Asian and Pacific Affairs, is the author of many books on Asia and China-US relations and vice-president of the Pacific Century Institute
- May 19, 2020