Canadians being not nice. “Maskaphobia” in Montreal. 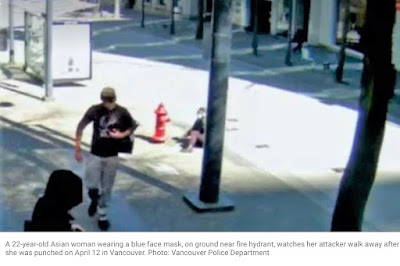 One of the things they say about Canadians — a bit of damning with faint praise — is that they’re “nice”.
Not so much lately. They’ve been rather not-nice.
Multiple reports today of them being out-and-out racist. They attack a woman of Asian appearance, above, because she’s wearing a mask and told to “go back where you come from”. Who knows? She was likely born in Canada. Asians have been there for generations and till now welcomed as contributors to the country. But viruses can scramble people’s brains.
Here in Hong Kong wearing a mask is normal and has been since 2002 SARS. I used not to wear a mask, because what I’d read from the experts (WHO!) said they weren’t effective or necessary if uu weren't frontline, but I started wearing them in public because it seemed the polite thing to do. Then WHO decided they were effective after all and governments are calling for them to be worn.
Back to Canada.
“Asian women in Canada abused, punched and spat on”. They call it “maskaphobia”.
Canadian rocker Bryan Adams, goes on racist. anti-China rant. (And gives non-apology apology).
“Opinion of China hits new low in Canada”. This view, TBF, is widely shared around the world.

Meantime a case of post hoc ergo proper hoc? That is, “X follows Y and is therefore caused by Y”. A (potential) fallacy. It may be true. It may not. They are saying that the lockdowns in Europe “may have saved 59,000 lives”. But there’s also plenty of data showing little correlation between infection rates and severe lockdown policies. In some cases (UK) the rates started falling before the lockdowns. In others, eg Italy, France, the increases continued well after the two week incubation rate. I’m not saying lockdowns were completely ineffective, but some aspects were, like locking down beaches and parks. The case for school closures remains doubtful. Stopping people going to work, when they can social distance, ditto. This will remain a fertile area for research for years to come.

Now I’m watching WHO official say on That  “this virus may be with us forever”. Well, duh! We were told that right at the beginning. And that we couldn’t hope to eradicate it. And that therefore our policies could not be based on eradication. Yet, as we’ve “flattened the curve” and “saved the health systems” — globally shared aims — we’ve also moved the goal posts towards eradication. If it’s true that it’s always going to be with us we need to find a level of virus in the community that we can live with, and how, and get back to work.
- May 14, 2020