UPDATE (9/5/20): reports that it was the US Embassy In Canberra that leaked the dossier.

How to report this news?
One straightforward way is in the headline above, in the Daily Telegraph, Australia. [Backup] [PDF]
I’m not a journalist, so I’ll just make a few observations:

1. The “Five Eyes” are the intelligence services of the United States, Britain, Australia, Canada and New Zealand. The dossier was apparently coordinated by Australia’s Office of National Intelligence (ONI). I haven’t been able to find an actual copy of the dossier, so I’m only going on the reports of the “leak” of the dossier. So it’s not clear to me if there’s any hard evidence of lab accident in the dossier as opposed to strong circumstantial evidence.

2. Australia’s Eye: I used to work in one of the “eyes”, the Australian Office of National Assessments, which is similar to the UK’s Joint Intelligence Organisation, and is now a part of ONI. I know their people then and since as professionals, keen to get the story right, trying stand back and be independent. I’m guessing there will be critics who say it’s bunch of racist bigots, or whatever. But no, these are serious, professional people.
They have access to a huge range of intelligence and information, far more than the average media outlet. They have access to the reports from all the embassies and consulates, from their spies and informants (“humint”), from electronic intelligence (“elint”) and signals intelligence (“sigint”), and all sorts of other “ints". To imagine that this is simply a rehash of what the media says is just nonsense. That said, it’s not clear if there is any new hard evidence, other than strong circumstantial evidence from a wider range of sources.

3.  Does the story matter? Yes, of course it does. We’re experiencing the worst crisis since the Second World War, there’s a battle of narratives out there, and this is one part of it. Of course it matters. More than anything it matters to try to find out what really happened. And it’s not credible to believe the China stories, given how many holes they have.

4.  Western media reactions: despite the fact that it does matter, there’s almost nothing about this in the mainstream media, or the liberal media. I only found out on a blog. You’ll search in vain for news of this on CNN, BBC, ABC, the New York Times, Washington Post. Below the fold I’ve posted screenshots of the first two pages of a Google search on this. There is not a single Mainstream Media or left-of-centre outlet that reported this story.

5. It’s all political: If you criticise China, you’re a Trump supporter. If you are not a Trump supporter, then you have to ignore inconvenient intelligence like this. Then again, “Criticism of China’s virus response does not equal support for Trump”.
I’ve posted below the fold screenshots of the first two pages of a Google search on “Five Eyes coronavirus dossier”. Have a look. It’s all right of centre sites. Not a one from the left. Why?

6. China’s reactions: 'China lashes Australia over virus dossier’. Here. Whenever the Chinese start talking of how we’re “hurting the feelings of the Chinese people” and the like, you know you’ve hit home. We need to ignore this victimhood nonsense. Sadly, our record is not good. We tend to crumple.  Not least because of the massive economic relationship.
Already we have the UK refusing to comment on the dossier. Why?

Below the fold: top Google results for search on “Five Eyes Dossier”
I Googled "five eyes dossier coronavirus”.  Not a single Left of centre in top two pages: 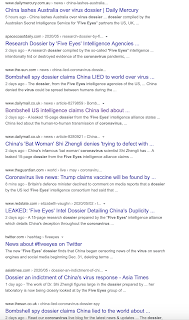 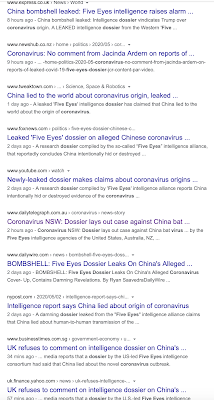