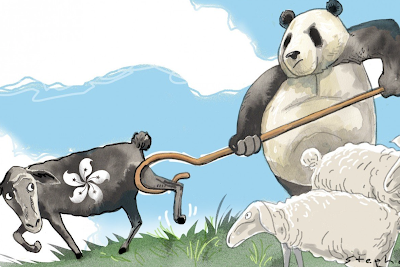 It’s not that I’m anti-democracy for Hong Kong. I’m not. Who can be against democracy? And it’s not that I welcome Beijing interference in Hong Kong. I don’t. Who would?
So I don’t report Robert Keatley’s gloomy predictions with any pleasure. He’s pretty much spot on, though he doesn’t note what I would: that the process, of “Beijing moving steadily” to control HK, is hastened by the ongoing violent protests and the legislative shenanigans of the pan-dems.
The way the protesters have gone about pressing their case is counterproductive and will make things worse, not better. It will lead to less democracy and fewer freedoms. And to me, right here right now, those freedoms are more important that the chimera of universal suffrage.
I’ve pointed out the Seven Freedoms we have. And I’ve also pointed out that we have wider democracy, at the ground level, than many people realise, and more than at the handover.
That’s why I’m a status quo-ite. Better keep the freedoms we have than lose them in a quixotic tilt at universal suffrage.
I have a couple of comments on Keatley's article.
Yes, Carrie Lam is unpopular, as all the C--Es have been since handover. Then again, so are most of the elected leaders in the west. Whereas Xi, for all his bullying boorishness is highly popular in China, and not because people are afraid to say they don’t like him. They aren’t. The research is by Pew, and I confirm from personal experience in China. Point being, the very fact of popularity is not a measure of anything much.
HK college graduates believe employers favour mainlanders: they ought to consider that it’s perhaps because that mainlander really is more qualified than they are. Educated more broadly, often in the west, with better English and better Mandarin, the two languages of international trade.
When I was boss of offices across East Asia, including Hong Kong and the mainland, I found that my employees in China were more open minded, more innovative, more keen to think outside the box than their Hong Kong colleagues. They also wrote better Chinese and knew more of the Chinese classics. Weird, right? Sure, but that was the case, and I noted it at the time.
Less moaning victimhood by these Hongkong graduates and more self-reflection might be in order here.
[Confucius Analects:  見賢思齊焉，見不賢而內自省也. “When you see a virtuous person, reflect on how they became so. When you see someone less virtuous, reflect on yourself ” (my translation)]
As for the housing crisis: yes, it exists. We have housing prices amongst the highest in the world. What is not pointed out by Keatley is that the reason there is less public housing is right down to the Pan-Democrats in the Legislative Council, who have over the years blocked the use of more public land for discount housing. Their reason? To block the government. That’s their whole agenda. They’re doing it at the moment, with endless haggling and filibustering, simply to block government business. They think that this will help them overthrow the government. They are wrong about that, and all they’ve managed to do is make things more difficult for the very students who are leading the protests.

Three years ago, when visiting Washington as she neared completion of her term as Hong Kong’s second-ranking official, career civil servant Carrie Lam Cheng Yuet-ngor said she planned to leave government and do something different at year end – “perhaps social work”.
Would that she had.
Instead, she became Hong Kong’s fourth consecutive chief executive to become wildly unpopular since China regained sovereignty in 1997, yet another Beijing-backed leader required (or quite willing) to enforce unwanted policies. Rather than provide strengthened self-rule, her term has seen growing mainland interference in Hong Kong affairs and a steady erosion of its promised “high degree of autonomy” – with predictable opposition. A recent poll found that 68 per cent of the public disapproves of her government.
That makes the answer to Hong Kong’s basic question – who is in charge here? – more obvious. Whenever the Communist Party considers the topic important, Beijing makes the decision and Hong Kong’s administrators must fall in line.

Any inconvenient law that suggests otherwise – such as Article 22 of the Basic Law – can be ignored; true local autonomy is a sometime thing. With increasing frequency, Beijing now says its representatives are entitled to guide local affairs no matter what the legalities may say.

Recently, Hong Kong police arrested 15 veteran advocates of a more democratic political system for allegedly illegal roles in mass protests last August and September. Chief Executive Lam claims this was merely a reasonable exercise of law enforcement. But they have long irritated Beijing by agitating for the freer electoral system widely expected after China regained sovereignty. Their arrest is a warning to others like them.

Lam soon after demoted four cabinet members and named five new ones, tightening control over a civil service whose members sometimes sympathise with protesters and to make her administration more pliable whenever Beijing calls.

Officially, this was to increase efficiency and speed up economic recovery once the Covid-19 virus is contained, not to appease the Communist Party. But many doubt this.

The context extends well beyond Hong Kong’s borders. Ever since he became Communist Party general secretary in 2012 and the country’s president in 2013, Xi Jinping has consolidated power and stifled dissent to a degree not seen since the days of Mao Zedong.

Hong Kong has not suffered the harsh repression of Tibet and Xinjiang, but its protesters have gone much too far for his taste. Though the city’s economy is no longer crucial to China, it still provides useful financial and other services that Xi seems ready to risk despite the cost. No communist party anywhere has ever tolerated much policy debate, and Xi’s version is no exception.

Thus he replaced both senior officials who oversee Hong Kong policy – one in Beijing and one in Hong Kong – with former provincial party bosses who earned reputations for crushing dissent. Neither has much Hong Kong experience and thus few old friends to favour.
Youthful protest organisers continue to blame China for their many grievances and say they will be back in force this summer after a lull due partly to the Covid-19 virus.

Among other things, many college graduates consider the local economy tilted against them, with the best career jobs – such as in finance – going to young mainlanders who have superior command of the official Mandarin (and often English) and may offer mainland connections that local businesses find helpful.

Often relegated to second-tier positions, they worry about ever meeting sky-high housing costs in an economy with one of the world’s greatest disparities between rich and poor. And because no Hong Kong autonomy is guaranteed past 2047, they worry even more about the longer-term future.
That anxiety feeds localism, the feeling they are Hongkongers first and less so citizens of China proper. And that is poison in Beijing where separatism of any kind is not tolerated. As a senior official noted recently, protesters have “colluded in a bid to turn Hong Kong into an independent or semi-independent political entity, and a base for infiltration, sabotage, secession and subversion against China”.

Beijing repeatedly blames foreign “black hands” – mainly American and British – for promoting dissent but offers no evidence. But it does fear that letting Hong Kong truly manage its own affairs could prompt similar demands across the border.
If major protests resume, a tough response is likely. New arrests could surpass the more than 7,600 total of past demonstrations.
At present, it appears that the September Legislative Council elections will go ahead, despite worries that the Lam administration might cancel them or further purge the ranks of pro-democracy candidates. Two former chief executives who faithfully echo the party line have formed an establishment coalition to give the Lam administration an electoral boost.

But if Beijing interferes more directly, there will be little pushback from Lam, who admittedly has a near-impossible job. Serving two masters – authorities in Beijing and the Hong Kong public – can never be easy. But her policies and governing style leave the impression that local priorities come distinctly second.
Even taking a 10 per cent pay cut to show solidarity with a public battered by a virus-caused economic relapse did not help much; at US$600,000 per year, she is one of the world’s highest-paid politicians.
Beijing wants action soon on two unpopular issues. One is to introduce “patriotic” education in schools, so students will “love” the Communist Party and the teachings of Xi. The other is passage of a long-delayed law against “sedition” that could well curtail present civil liberties. Past efforts have sent protesters into the streets; in the current political atmosphere, opposition could be even stronger.


China could respond with an even heavier hand. Beijing’s local office promises that it will not interfere “in general” but claims the right to “rectify” situations whenever it considers the national interest at stake. Whatever happens, Hong Kong’s prospects for true autonomy is bleak.