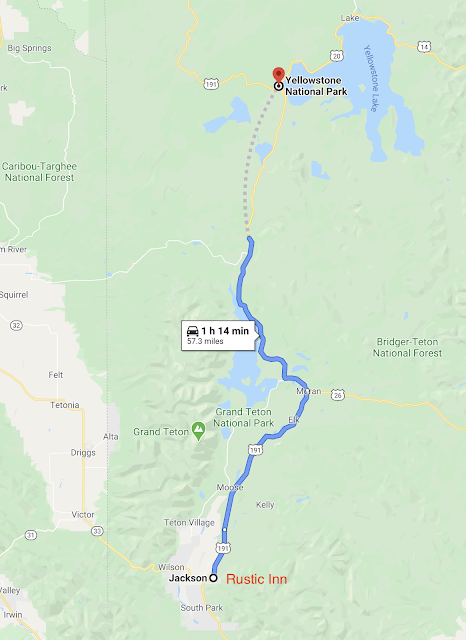 [Remember: this is just a Virtual Virus Vacation. It’s what I had booked before had to cancel coz Covid-19]

We do Rustic Inn → Yellowstone → Rustic Inn, in a day. Early start. Also maybe a reason to think maybe we ought be staying at Teton Village or Grand Teton, instead of Rustic Inn at Jackson. We’ll see.
A drive up the “Hole”, the valley of Jackson, to Yellowstone National Park, the first ever National Park in the United States, the remnants of a super volcano that could erupt at any time. So NatGeo tells us. Magnificent Yellowstone. I believe we may have to book ahead to get an entry permit.
And plenty of land adventures.
On the way we pass by the world-famous ski field at Teton Village on our left. What I’ve always known as Jackson Hole. And where I’ve long wanted to go skiing. I wanted to do its scary black runs. If I went there now, I think I’d be sticking to the red and blue runs, being now built more for comfort than for courage. Here’s the map of the ski trails. Pretty awesome. [Correction: not “black, red and blue” runs; that’s European and Aussie. In the US it’s “black, blue and green”. And looking at the ski map, there’s not much of the latter at Jackson Hole. It’s skier’s ski field]. Look at those runs on the left at “Hoback”.  They are steep!


New alternative history novel, ‘Rodham’, by Curtis Sittenfeld, imagines if Hillary had not married Bill. Out today and I just bought it on Kindle and it’s just been delivered to my iPad.
Given we are in Jackson Hole, here’s a clip. They’re in Jackson Hole, at a liberal fundraiser. (and, btw, random fact I learned recently: 50-60% of a Congressperson’s time is spent in fundraising. What a life):


The Grand Tetons rose behind us, a jazz quartet played on a patio near a stream, servers pressed bacon-wrapped dates and tuna tartare, and an unsurpassed quality of progressive schmoozing occurred.

Will we also see an "unsurpassed quality of progressives schmoozing"?
- May 21, 2020