Macron will have to do, then, “faute de mieux” 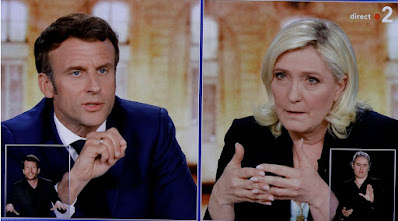 Being pro-Putin in Europe is a bipartisan thing. Both far-left and far-right osculate the dictator. The real practical threat, though, is from Le Pen’s far right.  Not just in thrall to Putin, but wanting to cause serious damage to Europe. (Presumably she doesn’t aim to hurt Europe. But that does seem an inevitable outcome of her policies, some of which, to me, are pretty scary; the road to hell…).

In the US, it was the Democrats — candidate Obama in 2008 — who mocked Republican candidate Romney for saying Russia was the main threat to the world. “The 1980s have rung and say they want their policy back”, said clever Barack. His Secretary of State Hillary infamously presented Boris Lavrov with a “Reset” button — offering to soften ties with a dictator who has already been in power for 8 years. It didn’t help that the button had used the wrong Russian word for “reset”, at least according to Lavrov (was he just trolling? Wouldn’t put it past him). Anyway, point being the the Dems can hardly claim the high ground on relations with Putin. And, moreover, that there must sorry have been an attempt to get sling, for a Russia on our side is better than a Russia on China’s side.

As Brian Stewart says of a Europe’s attempt to “reset”, to “get along” with Putiin, “Russia responded to all this with galloping malevolence.”

As we approach the denouement of France’s two-stage presidential election, it becomes clear that the race has been a missed opportunity to consolidate opinion in France, and perhaps Europe, against the malevolent rule of Vladimir Putin.

This may not greatly trouble the conscience of Emmanuel Macron, whose bid for re-election has been an unusually arduous affair. But the blunder is a microcosm of the feeble leadership he has demonstrated since entering the Elysée Palace. Under the banner of “the radical center”—rather more centrist than radical, one might say—Macron has steadily been drowned out by a cacophony of extremists on the Left and the Right. His appeal to French voters has been faute de mieux. To justify himself, Macron points only to the wretchedness of the alternatives on offer. [More]