Uncontrolled Internet is the “dream of every dictator, strongman and demagogue”. What TF?? 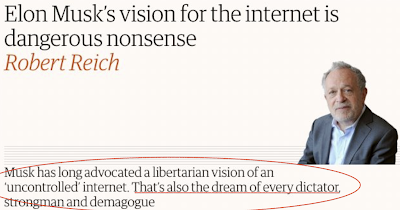 I saw that in a Guardian article by the egregious Reich and I’m WTF? I can think of countries right off the bat that are the exact opposite. China, North Korea, Russia. And other “enemies of the internet”.

This statement is unhinged. So much so, that they took it down and replaced it, but without acknowledging. A very different story:

I’m a big fan of Musk. Have been for ages.  A once in a generation genius and creator.

The panic by Twitter employees that Musk will “infringe" on their rights to censor views they don’t like tells you all you need to know. They are Stasi censors. They reveal it, like above, and then have to edit, without acknowledging.  Be gone, Reich!

ADDED: at the beginning of the Internet, the Left loved it, waxed eloquent about how it would give democracy and freedom to everyone in the world, who could have their voices heard. Now they mock “freedom of speech”, say it’s a Right-wing “talking points” thing, cause they don’t like some of the views on the net, on Twitter, on FB.  Crazy and hypocritical.