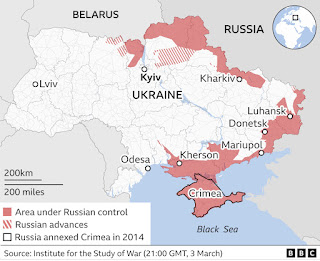 I know who I wish were winning. Ukraine. I’d love it if a crazy comedian offed a crazy clown. Zelenski def Putin. And that’s the narrative in the west. Ukraine is winning.The attack in Kyiv was a defeat for Russia. Hope so. But how much of that conclusion is wishful thinking?

There is another narrative. Scott Ritter, the UN arms inspector who said there were no WMDs in Iraq (and was correct against all the narrative at the time),  has a different story. The Russian advances on Kyiv and in Odessa were tactical diversionary attacks. They’re now doing what they aimed to go from the beginning: carve off a piece of Eastern Ukraine, the Donetsk region.

Which of these is true? I don’t know. And BBC and CNN don’t know. They, and we, must be careful of what we wish for becoming how we see in this fog of war.