My summary to date: way worse than SARS in 2002/03.
David Buick: “normal life is on hold for a while”.  Airline Flybe collapses. Costs already in the many Trillions. Parliament may be shut. And more. UK’s TalkRADIO 02’-18’.
China: Aviation industry collapse.
Schools shut here in Hong Kong awa Japan, Korea, Italy. At least.

There’s a guy saying what I said weeks ago: that if we hadn’t known about the virus, we wouldn’t know.  Meaning: it’s not obvious (like Ebola) and it’s not a major killer (like MERS/ Ebola). We wouldn’t notice a few people with a cough, or a few more old folks, mainly men my age+, dying early. True dat! Yet there’s now talk of shutting down the London Tube… and closing Parliament, (20’ in). In Japan, of postponing the Olympics. Does any of this make sense in the face of the actual risk?
Italy shuts down schools, cinemas, churches, all major gatherings, bans kissing, makes one square metre distance mandatory. All sorts of international gatherings being cancelled. Air travel down to almost nothing. Even if we shouldn’t be panicking, people and governments are panicking. Markets hammered. As money flees Stocks to Bonds, bond yields plunge to lowest ever levels.
But don’t worry! There’s always Allah. Iran Supreme leader says prayer will do it … really! And Pence action team pray. Duly mocked: 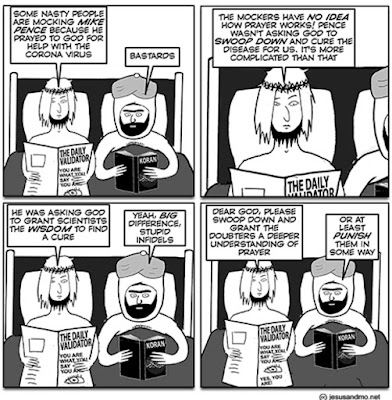 While…
This is not a drill
Communist Party’s Achilles heel. But… will be ‘bigger and stronger’
‘Infodemic’: spreading panic by smartphones
Hardship in America

OT: More depressing news: this winter in Europe its warmest on record.
- March 06, 2020