“The Joy of Fish”, A Daoist ding dong

Not the “joy of fish” in the sense that we humans enjoy fish, as in eating them. But the joy that fish themselves experience, at least according to the ancient Chinese philosopher, Zhuangzi.
It’s a famous anecdote in the canon of Daoism (or “Taoism”) a philosophy which searches for meaning (道, Dao = the Way) vs its more famous counterpart Confucianism which deals with social matters. Usually “The Joy of Fish”, sometimes translated as “The Happiness of Fish”.
The sages Zhuangzi (369 BC to 289 BC) and Huizi were wandering along the banks of the Hao river, in modern day Anhui province. They had this exchange:

English: (My translation):
Zhuangzi and Huizi were strolling by a bridge on the River Hao.
Zhuangzi said: "See how calmly the fish swim about, enjoying themselves."
Huizi replied: "You’re not a fish. How do you know they’re enjoying themselves?"
Zhuangzi said: "Well, you’re not me, how can you possibly know that I don’t know what makes fish happy?”
Huizi said: "If I, not being you, can't know what you know, it follows that you, not being a fish, can’t know what they know. Q.E.D.!"
Zhuangzi said: “Hang on. Let’s step back a bit. What you asked me was 'How do you know what makes fish happy?' From the very terms of your question, you obviously know whether or not I know what gives fish joy, which I know here on the banks of the Hao."
************
I studied this piece for my classical Chinese class at the Chinese University of Hong Kong, in 1977. Here’s the page of my text book and that’s my bit of calligraphy and marginalia: I was taking notes in classical Chinese... that’s my humblebrag (or not so humble...).  It's not too bad! Jing assumed it'd been done by a Chinese classmate or even my teacher. Anyway, was much fun and I’ve enjoyed doing Chinese calligraphy contemplating "The Joy of Fish" ever since. I’m not sure I fully get it, it strikes me that there’s a bit of slight of hand in the last riposte of Zhuangzi’s, but maybe that’s the point. How do we know what we know? 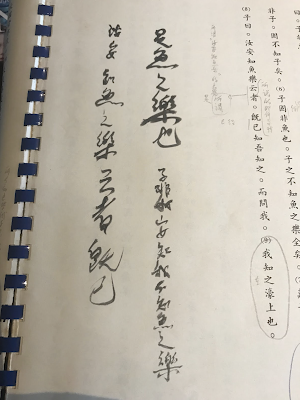 The Fish: 儵魚, Shu Yu, in this exchange is usually translated as “catfish”, but sometimes as “minnows”, though I don’t know why. It doesn’t much matter what sort of fish they are, I guess, save to note that “fish" in Chinese is itself auspicious, because Yú (魚), “fish”, is a homonym with Yú (余) or “abundance". And the catfish is doubly so, because it’s a Shu (儵) fish, “prosperous”, so it has prosperity in abundance. That said, it’s not much admired by fisherfolk, being bony and thin of meat.
ADDED: I came across a translation, from 1910, by the German philosopher Martin Buber.
ADDED: another translation, by Watson
- March 25, 2020