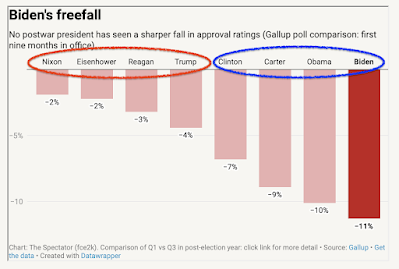 Isn’t this interesting? Of the steepest falls in approval ratings right after an election, all the worst are Democratic presidents. I wonder why that is? Buyer remorse?

In the case of Joe, it’s put down to “inflation, Covid and crime”.

In the case of inflation, perhaps we’d be in a similar situation if Trump were still president. Though surely to goodness it helps not one whit that the BidenAdmin is pumping trillions into an already overheated market. That’s Eco 101.

Covid is covid. What’s to say? Vaccine mandates are unpopular for sure.

Crime? Well, wow, in progressive states all over the US, crime rates are up.  Vids of shoplifting are just breathtaking / shocking: in San Francisco they’re looting shops right in front of security guards. Who are told that they are not to touch them, on pain of dismissal. This has been going on for some time now, but somehow the connection between policy (defund and demonise police) and outcome (more crime) is never made. There are no dots joined up. Weird. [ADDED: another eg]

Crime is a major issue across the country — and it is hurting Democrats badly. Last year, as progressives shouted “defund the police,” a cowed Democratic convention failed even to mention the riots breaking out in city after city. Total silence. The “bail reform” they pushed is directly responsible for putting violent offenders back on the streets and behind the wheel in Waukesha.

Now, disappointed voters are responding. They are defeating proposals to defund or reimagine the police in even the most liberal cities, including Minneapolis, the epicenter of the defund movement. The recent spate of smash-and-grab robberies in Los Angeles, the Bay Area and Chicago have ratcheted up public outrage even further, much of it directed at “Justice Democrat” prosecutors who refuse to prosecute “property crimes.” Criminal gangs have taken notice and taken advantage. [More]