My take on Peng Shuai disappearance 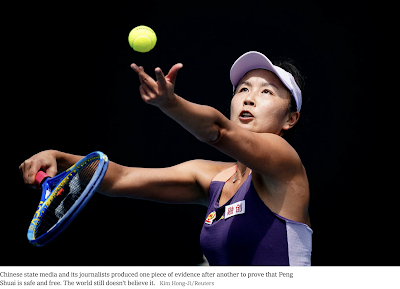 First up I thought “here they go again”. The Chinese apparatchiks, clumsy, obvious and crude, find an offensive post on China’s social media — a rambling jilted-lover letter, from tennis star Peng Shuai to her ex-lover, ex Vice Premier Zhang Gaoli — and they don’t just take it down, they “disappear” its author. Peng was out of sight for three weeks until yesterday.

And I thought these goons are again doing Xi’s bidding and again going full Streisand Effect. Something the outside world would never have noticed now becomes a major world story because of their bumblings. Job, guys!

Then I thought: the idea is to keep the local population ignorant of the post. They don’t care about the international. Beijing bully-boys don’t want their own population to call out senior leaders and get away with it. As for the west, well Beijing simply doesn’t care. (Though now there’s the fear of boycott of the Winter Olympics, which maybe led to her recent “release”, reported in WhatsOnWeibo)

So I rang a couple of contacts in China, well plugged into locals, and they confirmed: there is NO news about this in China. Nothing. These contacts get their own news from set-top boxes with cable to the likes of CNN, CNBC, Bloomberg, DW, but most locals don’t have that. Locals watch the ubiquitous local soaps and quizz shows. I tried out my theory on them and they agree — Beijing has to keep the lid on people in China. If that means pissing off the rest of the world, so be it.

A few other observations:

The original post was taken down in two minutes. Two minutes! Imagine that! I’m thinking -- and my contacts agree -- that the censors must have an Alert button for every single important leader, like Zhang Gaoli, and for every single public figure like Peng Shuai.

Process is like: Alert goes off > routed to a Human > human thinks 该死! Holy shit! > immediately takes it down > tells goons > Peng disappears > the west goes ape  > the goons (maybe under direct orders from “the X-factor”) talk Peng into doing what she did yesterday > give “Proof of Life” > to the head of the IOC > fixed smile on face > “I’m fine”..... Really! (She asks for “privacy”, a touch ironic given the intimacy of her post, but…oh, well…).

Forced sex? The character 要 yao in the first tone means “to force”, but in the fourth tone means “to ask. This has been rendered both ways in the translations, first as “ask” (for sex) and second as “force”. Later, Peng is clearer and uses 逼 bi, which is unambiguously to “force”. So there’s definitely that accusation against Zhang. Just some ambiguity in places.

That said, the whole of the post, this open letter, reads to me more like the outpourings of a scorned woman. A jilted lover. She’s been dumped and she’s upset. It seem clear that she was in love with him, and apparently he was smitten with her as well. He was a cad, for sure. And I don’t want to sound like I’m excusing some horrid actions by Zhang. But read the post, an anguished love letter, really, and see if you don’t feel this is recognisable as that.

Zhang’s wife is a piece of work. Name of Kang Jie, which immediately reminds me of Kang Sheng, Mao’s secret police chief. A thug of the first order. AFAIK Kang Jie is no relation, but seems as sinister. Complicit, like Ghislaine Maxwell, procuring Peng for her husband, stationing a guard at his door so he wouldn’t be disturbed while poking Peng.

The below translation is from here. I’ve checked it against the Chinese; it’s accurate, indeed felicitous. It’s below the fold, with thanks. The Chinese original is underneath it. 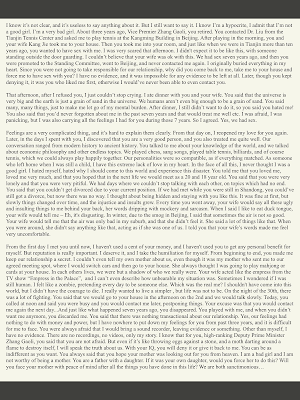 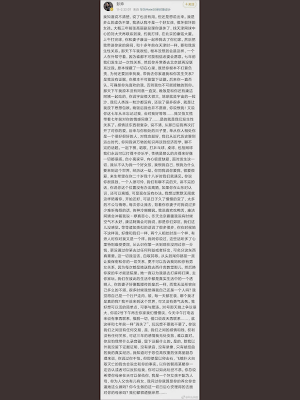