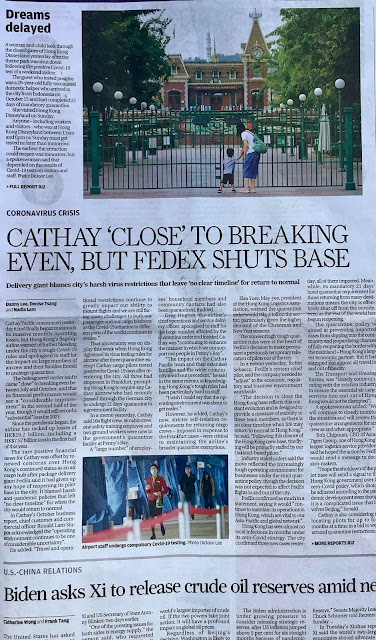 A “three-fer” of fun stories in the front page of today’s South China Morning Post.

1.  Top story is about the closure yesterday of the whole of Hong Kong Disneyland. Because one case. Imported.

2. The second story is also because zero Covid policy: FedEx says it’s pulling out its HQ from Hong Kong because there is “no clear pathway out” of the current  order lockdowns.

As I describe it, this is Hong Kong deciding on the GBA strategy rather than the GFC strategy.

GBA = the Greater Bay Area of southern China. That is looking inwards to China. Part of Belt and Road. A boring government description of GBA, highlighting civil servants’ ineptitude at PR. Plenty of other descriptions at your favourite search engine…

GFC = Global Financial Centre, which is what we’ve been since the seventies. Which means looking outward to the world. Well, we e made our bed, it would seem. FedEx is just one more in the gathering departure of international companies.

3. The bottom story is Joe Biden asking China for more oil. Because he’s shut down pipelines and halted fracking. Which kind of means no net reduction of emissions due to oil hasn’t really changed, just that the source of the oil has changed. Fracked gas emissions are less than a fifth of oil’s. The escaped methane during fracking issue is largely fixed. Opponents are driven by opposing the good because it’s not perfect. Yet it did allow the US to reduce carbon emissions while increasing renewables.