Could China be “5 Ozzes” smaller? 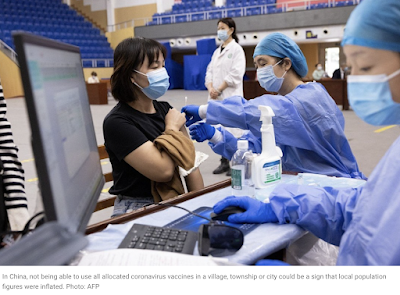 Back in the day we used to say a body of water was “One Sydarb” or “Two Sydarb” in size, a “Sydarb” being one Sydney Harbour’s worth of water. I remember the Ord River scheme in north Australia being described as something like “5 Sydarbs”. Now, my new term: the “Oz” (pl: “Ozzes”) which is a measure: the size of the Australian population. Background:

China may have a smaller population than its latest census says (1.41 billion in 2020). Because of much closer checking of the population via the vaccine roll out reveals that many local governments have been over-reporting their populations, by between 12% and over 30%, based on the two cases cited here. If we take a more modest over-reporting of 10% that would be 140 million fewer people than the census says. By my calculation that’s 5.6 times Australia’s population. 5.6 Ozzes.

TL;DR: China may be “missing” the equivalent of “nearly 6 Ozzes”.

China’s coronavirus vaccination programme is having a side effect: casting doubt on the nation’s recently completed once-a-decade census that put the population at 1.4 billion people.

The task of conducting a census in a country as vast as China could only be undertaken by the National Bureau of Statistics, and the result announced by the bureau is official and final. Any suspicion about China’s real population size, therefore, can easily be dismissed by Beijing as groundless.

Then again, a commenter in the article makes a good point:

Okay, something doesn’t add up. Data misrepresentation is a given in China, no surprise here. So if the local government has overreported its population to get more benefits, why couldn’t it just throw away the extra vaccines/over report the vaccinations rate to match the false population rate? If they have lied before, chances are they would do their best to keep the lies, so what makes it so different this time that they have to fess up?